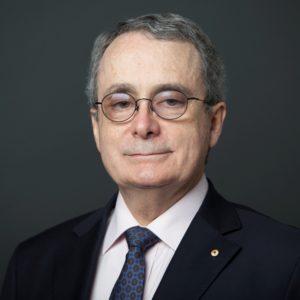 Professor Doug Jones AO is a leading independent arbitrator with over 40 years’ prior experience as an international infrastructure and disputes projects lawyer. Acting for owners (in both the government and private sector), financiers, contractors, consultants and subcontractors, Doug has advised extensively on major projects in the areas of project structuring and financing, telecommunications, buildings, airports, ports, road and rail infrastructure, power, mining infrastructure, potable and waste water, and on offshore oil and gas.

The arbitrations in which he has been involved include infrastructure, energy, commodities, intellectual property, commercial and joint venture, and investor-state disputes spanning over 30 jurisdictions around the world. He has extensive experience as arbitrator under the ICC, LCIA, AAA, ACCL, CCCL, ICDR, KLRCA, SIAC, DIAC, ACICA, IAMA, AMINZ, European Development Fund Arbitration and Conciliation Rules, as well as the ICSID and UNCITRAL Rules, in disputes of values exceeding some billions of US dollars.

Doug is acknowledged as a leading arbitrator and is highly ranked in a number of leading publications. Chambers Asia-Pacific has recognised Doug as “without question the leading Asia-Pacific-based arbitrator for construction disputes” and testified that “[h]e is regarded by many as “the leading construction arbitrator in the world””. In 2019, he maintained his Band One ranking in the Chambers Asia-Pacific International Arbitration Category for a ninth consecutive year. In 2017, Who’s Who Legal praised Doug as “one of the best construction lawyers and arbitrators in the world” as he is “unbelievably efficient”, and for his ability to “handle the most acrimonious of disputes”. His substantial contributions and leadership in the Australian legal profession was recognised when he was honoured with the Michael Kirby Lifetime Achievement Award at the 2014 Lawyers Weekly Law Awards.

Doug has held appointments to multiple international professional associations, including serving as the Chair of the Board of Trustees, President (2011) and Chair of the Centenary Celebrations of the Chartered Institute of Arbitrators (CIArb). He is also the President of the International Academy of Construction Lawyers (IACL) (2018- present) and the Immediate Past President of the Australian Centre for International Commercial Arbitration (ACICA) (2008-2014). In 2018, Doug also chaired the International Council of Commercial Arbitration (ICCA) Congress held in Sydney.

Most recently in 2018, Doug was the first lawyer to be awarded the John Shaw Medal for outstanding contribution to the road transport industry. In 2016, Doug was made one of four living Companions of the CIArb. He was awarded an Officer of the Order of Australia in 2012 in the Queen’s Birthday Honours List for his distinguished service to the law and leadership in arbitration, alternative dispute resolution, policy reform, and national and international professional organisations.