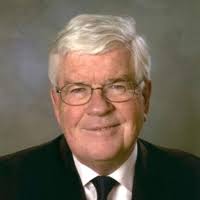 Mr Heerey was educated at St Virgil’s College, Hobart and the University of Tasmania where he graduated with degrees in Law (First Class Honours) and Arts.

After four years as a solicitor he commenced practice at the Victorian Bar in 1967. He was appointed Queen’s Counsel in 1985 and a Judge of the Federal Court of Australia in 1990. He retired from the Court upon reaching retiring age on 15 February 2009.

He is the Chair of the Advisory Board for the Graduate Program in Intellectual Property Law at the University of Melbourne.

He has published papers in Australian and overseas professional and academic journals in the areas of corporations law, defamation, expert evidence, intellectual property, law and literature and Federation history.

He has been Judge in Residence at Samford University, Birmingham Alabama (1993), McGill University, Montreal, Quebec (1996-97), University College Dublin (2001) and the University of Tasmania (2005). In 2007 he taught a course in Patent and Trade Mark Law at the Monash University campus in Prato, Italy.

He is Deputy President of the Arts Law Centre of Australia.

In 2009 he was appointed Chairperson of the Australian Electoral Commission.