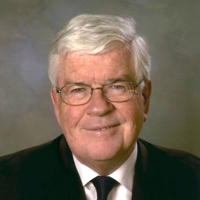 Mr Heerey was educated at St Virgil’s College, Hobart and the University of Tasmania where he graduated with degrees in Law (First Class Honours) and Arts.

After four years as a solicitor he commenced practice at the Victorian Bar in 1967. He was appointed Queen’s Counsel in 1985 and a Judge of the Federal Court of Australia in 1990. He retired from the Court upon reaching retiring age on 15 February 2009.